Elektromontaža among the sponsors of Ribnica Volleyball Club 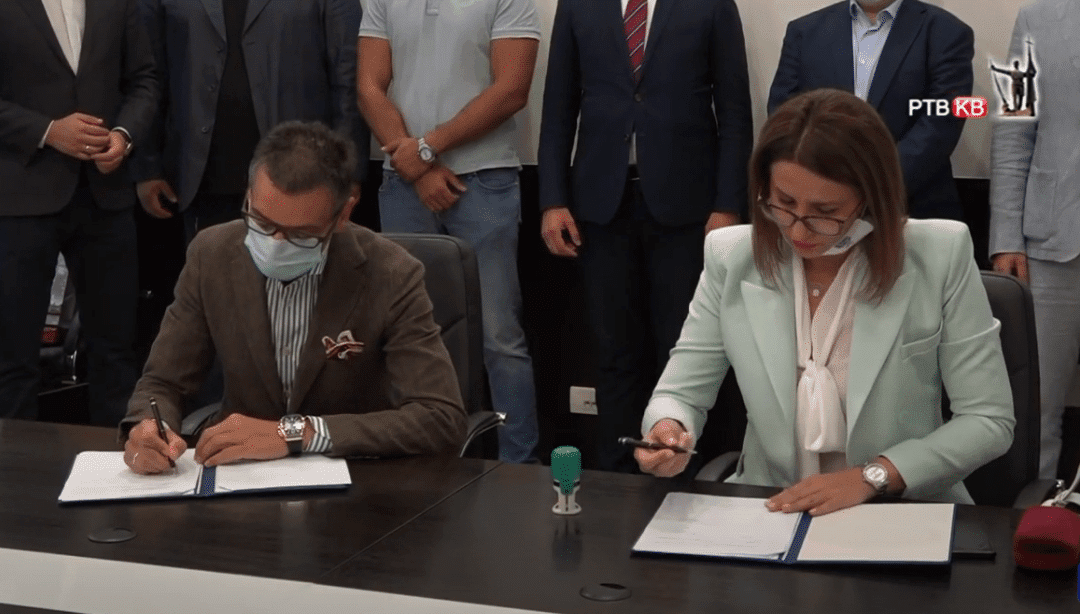 Dedication to the common good and community progress in every life segment forms an integral part of the Eletromontaža’s long-term development strategy. Such philosophy has been confirmed again by signing a sponsorship agreement with Ribnica Kraljevo Volleyball Club.

As one of the three sponsors that will guarantee a material stability of the Club from Kraljevo in the following one-year period, we have proudly shown again that social responsibility, as a measure of acknowledging the general and particular social interests, with other fundamental principles, is one of the imperatives of our business policy.

United in a desire to strengthen the Club and to contribute to the improvement of volleyball sport, we have shared joy during the agreement execution with the officials of Ribnica Volleyball Club, and the highest representatives of the City. Our host, the Mayor of Kraljevo, could not hide his satisfaction over the agreed cooperation. While addressing the attendees, he expressed gratitude for the support and trust of the three powerful companies that provided wind beneath the wings of a former Yugoslav Cup winner, and expressed his belief that this way Ribnica shall become stronger, more stable and ready for new victories.

On behalf of sponsors, the director of Elektromontaža Kraljevo, Zoran Stanković, addressed the media. Speaking about the importance of these and similar actions which contribute to strengthening of the society as a whole, and to its progress, Stanković pointed out: „Social responsibility, followed by support to sports, culture, or through helping those most in need, is not, and it cannot be, only part of a promotion strategy and declarative corporate culture–on the contrary, it should be widely accepted ethical norm governing our everyday conduct. The possibilities of each of us are different, but the common good should be and must be our mutual goal. By doing so, we shall achieve that even the smallest steps become visible to the benefit of the entire community, thus bringing happiness to us who have had a possibility and a privilege to be part of the noble initiatives.”

The main inspirer and intermediary in realisation of the sponsorship agreements was Mr. Dragoljub Zbiljić, the actual president of Vojvodina Volleyball Club. As a sign of gratitude, the Assembly President of this Super league club from Kraljevo, Stojan Paunović, has awarded to Mr. Zbiljić a shirt of Ribnica Volleyball Club.